A coastal council has voted to ban flying rings from all of its council-owned beaches after at least three seals got the plastic toys stuck around their necks. 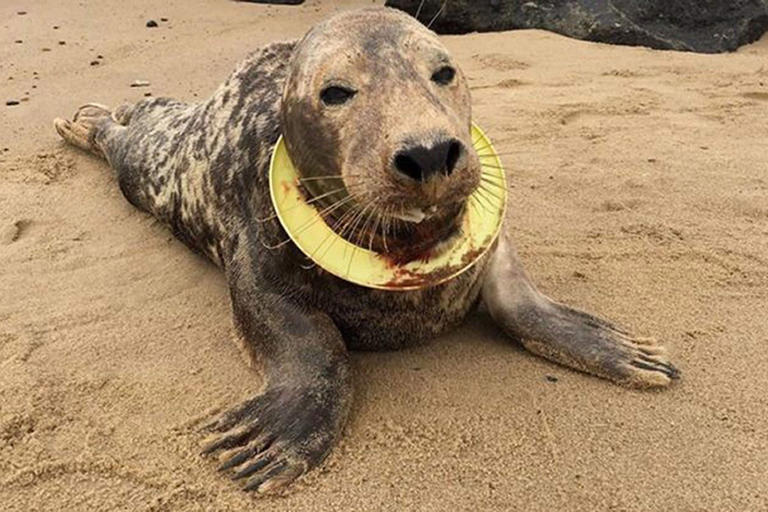 The inquisitive animals each poked their heads through the hole of a flying ring around the Norfolk coast and then could not take it off, with the rigid plastic cutting into them as they grew bigger.

King’s Lynn and West Norfolk borough council has now resolved to ban the plastic rings from its beaches, following a campaign launched by a member of the Friends of Horsey Seals volunteer group.

The first seal to get its head wedged in a flying disc, nicknamed Mrs Frisbee, was rescued at Horsey beach in east Norfolk in 2017 and taken to an RSPCA centre, where the ring was cut off.

Retired social worker Jenny Hobson, who volunteers at an RSPCA animal hospital in East Winch, launched a campaign against flying rings after a second seal got a disc stuck around her neck in 2018.

The 67-year-old, who lives near King’s Lynn, was volunteering at the RSPCA centre when the blubbery mammal, nicknamed Pinkafo, was brought in.

In a photo, she said, Pinkafo “looked like she was dead on the beach”, but she survived.

After she was cut free, the wound was treated with antibiotics, pain relief and regular salt baths.

“I happened to be on shift at East Winch helping out that evening when she was brought in,” said Ms Hobson.

“I saw the state she was in and the ring around her neck.

“I just felt I had to do something.”

This week, the cabinet of the Borough Council of King’s Lynn and West Norfolk voted to “prohibit the use of flying rings on council beaches and proactively discourage their use in other areas where there is a chance they could end up in the sea”.

Ms Hobson said she believed the authority was the first council to take such action and she hoped that others would follow suit.

“It’s wonderful news, a real breakthrough I think,” she said.

“It’s a real step forward that the problem with the seals is being taken seriously.”

“We’re doing it because of the horrific pictures we’re seeing of seals with these rings around their necks,” he said.

He said he would liaise with Friends of Horsey Seals over an idea for “common signage around the coastline”.

“What I said I’d do is liaise with them and see what we can do and what can be universal around the whole of the coast. There’s no use having particular signs in West Norfolk and signs in North Norfolk that are different,” he said.

Ms Hobson said she wanted people to stop taking flying discs to the coast and to use solid ones instead so seals could not poke their heads through.

She is also campaigning for shops to stop selling the discs.

We have 153 guests and no members online